skip to main | skip to sidebar

Started to machine uprights from R25. Rears are basically done. Fronts are almost finished, just need space for calipers to be machined out. Finally starting to see some results. Spent a small fortune on equipment, but at least software was free and open source. All milling is done under control of EMC2. All toolpaths are generated by PyCAM. Both are great programs.

I don't have good light setup and upright are kind of hard to capture under current light. Here is picture I have at the moment. Might update it later with better picture. 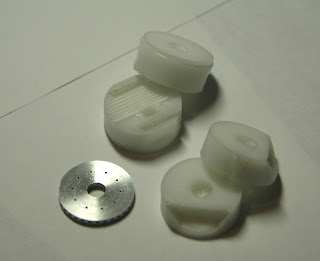 Here is new adventure waiting for me. Bought this kit recently. It should contain all I need to start my experiments with resin casting. First tryouts will most likely fail, but there are lot of manuals in the Net and I should be OK in a short while, hopefully. 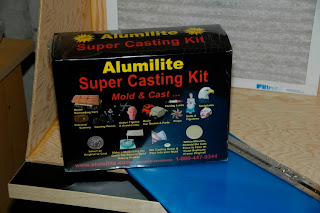 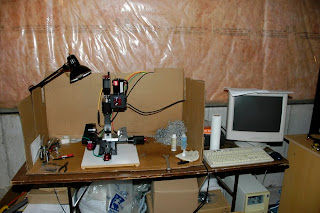 Sherline Lathe is manual at the moment, but I have plans to update it to CNC control in the future. 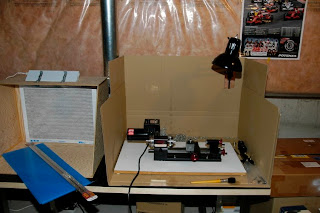 Here are some shoots of my progress on paint booth. Box made from playwood. Powerful vent motor attached. Few feet of duck pipes.

Here is just a box 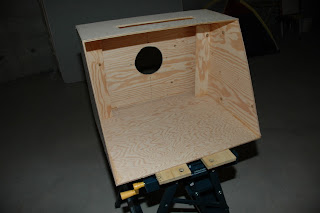 Here is booth with pipes in place 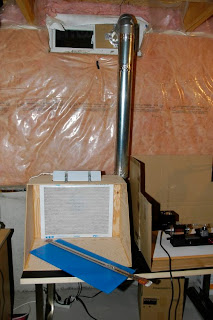 And here is how booth looks from behind 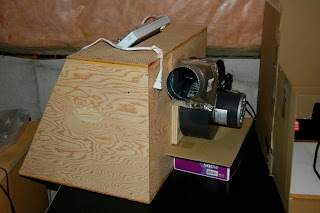 PS: Please don't pay attention to the mess around. It's going to be cleaned, eventually.
Posted by Sergey at 10:57 PM No comments:

Ioan made beautiful 3D CAD model of R25's rear wheel. Front is coming too. This is huge help for machining process of new wheels. Great professional work. Miles away from beginner level models I do. Couple of snapshoots - 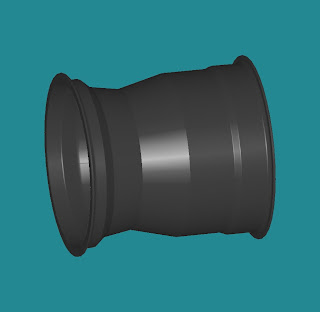 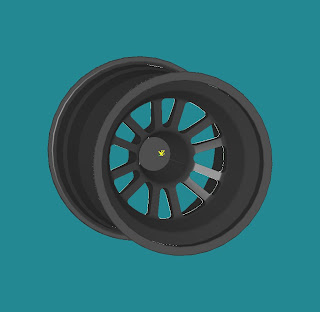 Here are pictures from 2D drawings for R25's wheels I've made. They are kind of confusing, but I'm not a professional. Suggestions on how to improve them are welcome. 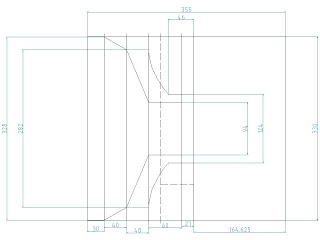 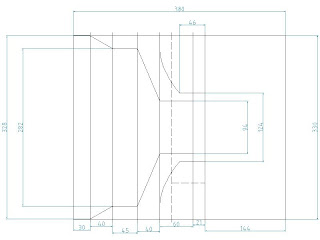 Posted by Sergey at 9:25 AM No comments:

Distraction from side projects

With not much free time available in a first place, I yet have to divide it between modeling as main hobby and other side projects. The projects are most of the time somewhat related to modeling though. Here is short list -

CNC shop setup - I spent quite a lot of time buying used and new parts, assembling machines, researching available stepper and servo systems and finally assembling my own CNC Mill with Xylotex drives. Process was lenghtly, expensive and took quite a lot of effort. If I had to do it again, I would rather buy complete CNC ready Sherline machines and ready to use Xylotex boxes. That would seem like more cost upfront, but would save money at the end, requires lot less effort and be much faster. Anyway, I eventually got machines up and running and now can produce parts on my Sherline CNC Mill and manual Lathe machines.

CNC software development - Apparently there is no CAD/CAM package among commercial systems priced to be affordable by modeling hobby enthusiast. Unless you produce stuff for sale and it makes very good profit, you wouldn't be able to afford invest few thausand dollars into commercial CAD/CAM system. So I set out to find free open source alternatives. I found CAE software called Salome, which includes pretty powerfull geometry module. It doesn't have suport for parametric modeling, as commercial systems have. But it's based on robust and powerfull OpenCascade platform and provides most of other typical features of 3D CAD. All my 3D CAD models created to date, were done in Salome. Situation with CAM is not as good. There basically isn't any feature complete free open source CAM system at the moment. Lot of different open source CAM projects were started and stalled or died over years. Two recent ones, which still alive and showed some promissing potential are PyCAM and HeeksCNC. HeeksCNC developers apparently found Adaptive Clearing code created by guys from freesteel.co.uk site and integrated it in. I've being testing and helping to develop features for both projects. PyCAM was most instrumental in creating toolpath I used so far.

Machining parts - apparently making parts on CNC and manual machines takes quite a bit of time and effort too. Beside stock, supplies and cutting tools aren't that cheap. Surprize. I did not realize how much I would need to invest into machine shop, before I can produce parts, which would otherwise be printed via available services on 3D printer. In theory in a long run machining my own parts should have being less expensive then having then 3D printed all the time. In reality I still have to send some part for 3D printing, because I could not machine them and costs of running CNC machines isn't low either.

Custom paint booth building - this is another project I initially took on to reduce costs, but ended up paying more in the end. Again it took a lot of effort, more money then one ready to use and quite a lot of time to finish. It's actually not yet 100% finished, but basically usable.

Long winding post. But at least some of the side projects are finished or almost finished and I can concentrate on modeling more. Oh no, wait, there are more projects on a horizon. Need to cast resin copies of F2002's seat, so have to master resin casting. Then will have to print some custom decals for R25 too. Never ending story, but keeps me busy and sane.
Posted by Sergey at 10:55 AM No comments:

Here is an example of CNC machining and toolpaths generation I have to do to produce some of parts for my 1/12 conversion projects. On the pictures are screenshoots from EMC2 CNC control software and shoots of part at different stages.

I've decided that number of parts for my 1/12 conversion projects better be printed on 3D printer, simply because I have no other way of scratch building them. Great service at printapart.com was mentioned in posts from gpma mail list. I'm trying to fill up printing volume to decrease price per part and make as many 3D models as possible for all current and planned 1/12 conversions. And beside that correct Brembo calipers for Revell's F2002 model if course.

Latest 3D model is brake rotor for F2007. It has distinctive vents configuration, which would be impossible to reproduce using machining equipment I have. So, I decided to add it to 3D printing order. 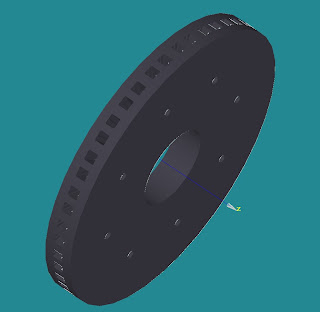 Before that I've finished 3D CAD models of AP Racing brake calipers for R25 and MP4/20 conversions. They have to be printed too. My attempts to machine them failed, as calipers are way too small and complex in shape to make on CNC Mill. 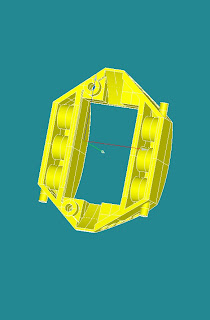 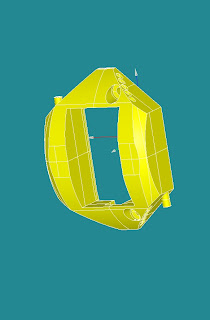 R25 diffuser's CAD model was most complex to date I had to create. After it any other models will be simpler. 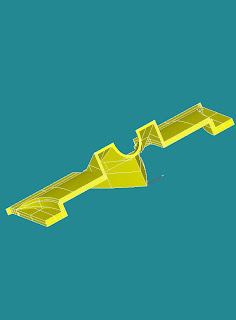 Posted by Sergey at 9:06 AM No comments:

I've started project for conversion of 1/12 scale R/C car to static model of 2005 world champion Fernando Alonso almost 2 years ago. R/C car was produced by NewRay in china. It's surprisingly accurate copy of this beautiful Formula 1 car. But being R/C toy is has many shortcomings. The goal of the project is to correct as many inaccuracies and shortcomings as I can and build more accurate static display model. If you want 1/12 scale models of modern F1 cars, those R/C toys are the only cheap alternative to expensive multimedia kits from Italy. Here is the link to original thread in f1m.com forum -

This project got some good traction recently. I'm going to post more updates shortly.
Posted by Sergey at 8:40 AM No comments:

I have many project going at the same. Instead of posting updates to different forums and blogs, I decided to create my own blog and post updates as I go. I will let blogspot server to sort posts by categories. This way anyone interested can select and follow only posts for particular category.
Posted by Sergey at 8:36 AM No comments: